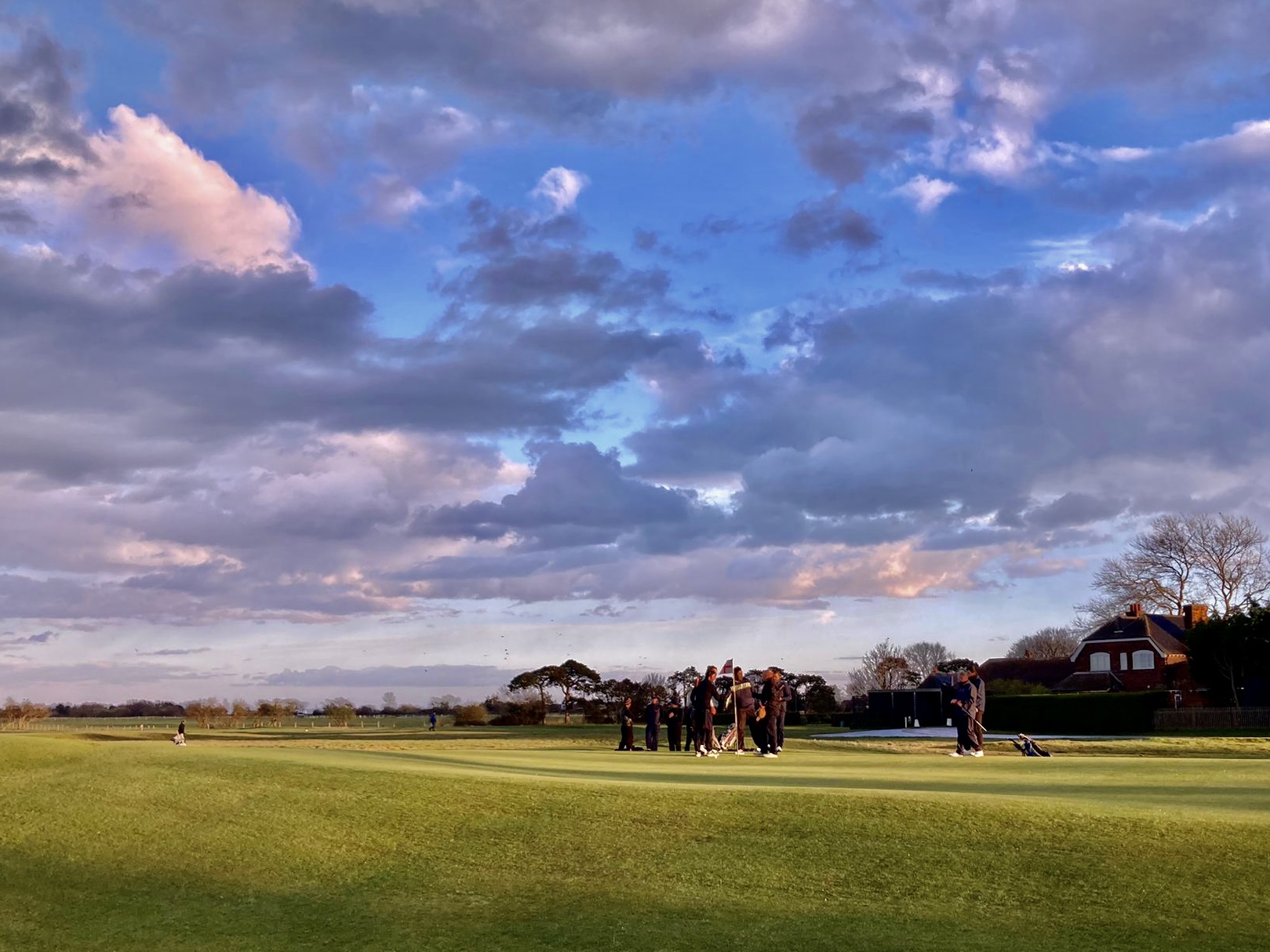 The 2022 Halford Hewitt Team representing the OHGS was made up of the following five pairings:

The hard work had been put in over the winter months with many weekends of inter-harrow games being played across the south of England. Choosing the final team had been tough given many OH’s had played well in the build-up, a great sign for the future.

Within this side were three debutants: Nick Compton and Finlay Matheson, both Druries boys and Will Denehy of Bradbys. Harrow was also very happy to welcome back Kunal Rawal after six years of ‘avoiding’ links golf.

Harrow was drawn against Stowe with a late tee off on the Thursday at Sandwich.

The wind was from the South West; hard off the right down the first hole at Royal St George’s. From a member’s perspective, this was normal, however, it was blowing at 40 mph and gusting at 50+ mph. This would be a war of attrition and it was obvious from the off that it was a day that matches would be won and lost on the greens.

Thanks to Charterhouse, Eton were out of the competition before we had even started. The stage was set and the first tee was graced with a number of well lunched, excited and wind swept OH support; namely David Blackburn, Geoffrey Goddard, Jerry Fricker, Nick Tindall, Jamie Warman, James Amies and Adrian Gracey.

“The toughest conditions I’ve ever played in” - the words of Matt Gibbens leading out the first pair.

Matt and Charlie Witter played well grinding out par after par and leaving Stowe hanging on by their fingernails and needing to make eight consecutive reasonable length putts to simply stay in reach. Level par from 10 to 15 was enough to secure Harrow 1 a 4&3 win and the first point of the 2022 campaign.

Out second was Jan Brugelmann and Dan Carver. Fresh off four days golfing in France, a battle with border control and a last-minute Covid scare, the boys went out in high spirits. Sadly, an unfortunate rake placement on the 6th and then a well-holed birdie putt from Stowe on 9, the pair found themselves 2 down at the turn. With gritty wins on 10 & 11, Harrow was back to A/S but lost 12, 14 & 15 to go dormie 3 down. Although a nice par on 16 with a well-struck 3-iron, Harrow 2 was not able to keep the game alive beyond 17 and lost 2&1.

Harrow 3 was a new pairing of Kunal Rawal and Nick Compton who were both the same year at school and had fond memories of winning the Micklem in 2000 along with captain Hamish Morrison.

They had a very hard-fought match versus a strong Stowe pair. ‘A fun match for the neutral’ as Kunal put it, with very few halved holes leaving Harrow one up on the 16th tee. A decent tee shot from Kunal and a bold putt from Nick resulted in a rare birdie and two-hole lead taken to the 17th tee. The 17th was lost to a good par, but without panicking Kunal hit the fairway down 18 leaving Nick about 200 yards. Nick fired a superb 2-iron to the front left of the green leaving a testing two-putt for par to close out the match with a 1up win.

Harrow 4 was another new partnership made up of Finlay Matheson and Will Denehy. A slow start meant that they were 2 down thru 7. Maybe feeling a little unlucky they stayed patient and with some resilient fairway finding off the tee and sensible iron play they were able to bring home a seamless 2&1 win.

Harrow 5 of Rupert Harmsworth and Hamish Morrison played faultless golf and secured a solid but maybe unmemorable 5&3 win. Rupert was disappointed to see it recorded as a 4&3 victory but apparently it is more ‘gentlemanly’ to record victories by a single hole!

Harrow had navigated a tough Stowe side and made their way to the second round where they would meet Lancing.

We awoke to grey skies and stillness; the high winds had passed, and the forecasted rainfall had disappeared. It was another long wait with an afternoon tee time.

A change around with the order saw Harrow 1 and 2 swap leaving Jan and Dan to lead Harrow out.

After a delay of four holes playing behind the final group of Rossall vs Marlborough playing extra holes, each of their shots was separated by what seemed like an age, Harrow 1 came out of the gates quickly, winning the first 3 holes. After a win on 8, the top pair had established a 4 hole lead. Lancing fought back, however, a gutsy up and down from over the green on 15 and a timely birdie on the par 3 16th gave Harrow 1 the 4&2 win.

Another good start for Matt and Charlie saw Harrow 2 one up after one and put pressure on the opposition who missed greens on 2,3,4,5 and 6 giving Harrow a 5 up lead.  Having learnt that mercy has no place in the Hewitt, birdies on 7 and 9 were enough to take the match 9&8. A short day’s work for Harrow 2.

Harrow 3 played very solid as a pair, they got themselves dormie 4 up but a couple of good putts from the opposition delayed the inevitable and Harrow 3 won 2&1.

Matheson and Denehy started impressively again at the fourth pair, with holes 1 and 2 in Finlay’s words “being played to perfection”. However, a 3 hole lead diminished rapidly with the opposition draining lengthy putts. Nevertheless, Harrow 4 stood firm with a mighty up and down on 12 from the bunker and a classy birdie on the 17th closed out the match in style.

Harrow 5 had a fun game. A slow start eventually caught fire with birdies on 7, 8, 9 and 10 and winning the 11th against the head essentially took the match out of reach. With the sun slowly setting a hailstorm broke out just to keep everyone on their toes! A delicate lag putt from Rupert on the 15th gave Harrow’s fifth pair another 5&3 win and the team had claimed the first clean sweep of the 2022 Hewitt Draw.

Harrow was through to the weekend and a move over to Royal Cinque Ports on Saturday along with a morning tee time meant for an early night, once the Masters' coverage had ended anyway!!!

Awaking to sunshine and barely a breath of wind, the scene was set for a glorious day on the links.

Jan and Dan stayed at the top pair with Matt and Charlie second. A fast start was required against a tough Repton who had managed to overcome Epsom the previous afternoon and stood in the way of a Quarter-Final spot.

Harrow 1 took an early lead after the ditch was visited by the opposition on the first hole. After 2 quick back-to-back losses, Harrow found themselves firmly on the back foot. Managing to square the match through the sixth they lost three of the next four and found themselves 3 down with 8 holes remaining.

Harrow won 11 and followed with a bold birdie on 12, they were back in the match. A few halved holes saw the top match at a precarious 2 down with 3 to play when the Harrow top pair received its first gift, a wayward drive from Repton into the long fescue to the right of 16. Showing ‘some balls’ down the 17th took Harrow to the 18th tee all square. To be continued…

Charlie Witter continued to hit the ball miles giving Harrow 2 a good advantage, however, the move to Deal came as quite a shock with the greens feeling twice as fast as Royal St George’s and both Matt and Charlie handled the change poorly. Despite being much the better team from tee to green, hitting all but two fairways and missing only one green, their putters were cold and a couple of un-timely three-putts and even a cheeky 4 putt were the difference. Harrow 2 lost 2&1.

Harrow 3 came up against a very inform pair who putted phenomenally, the Repton pair made a couple of 25-foot putts and were a few under on the front nine leaving Harrow on the back foot. Kunal and Nick played well but sadly could not get their noses back into the game after finding themselves 3 down through 10 holes. Harrow 3 lost 4&3.

Harrow 4 saw Matheson and Denehy maintain their momentum from the previous day with a comfortable birdie on the first. Finlay and Will were settling into the Hewitt and really establishing themselves in the fourth pair role. It is safe to say they were enjoying themselves! Fairway after fairway was hit and green after green secured a pleasant 5&4 win.

Harrow's fifth pair came out of the traps fast with a couple of birdies finding them 3 up through 6. Harmsworth had his putting boots on, he rolled in a glorious 15 footer on 11, nestled in a wedge for a ‘gimme’ birdie on 12 and then literally walked in another 15 footer on the 13th green to make it dormie 4. Harrow closed out the match on the next with their third 5&3 win of the week.

At this stage, the overall match was level at 2 points apiece and Harrow's first pair was walking towards the 18th fairway followed closely by The OH supporters.

Much like the scoreline, nothing could separate the teams after their second shots, with both Repton and Harrow over the back of the green in two. Both hit decent pitches to 6 and 8 feet respectively. Putting would decide this one!

In the end, “drive for show, putt for dough” couldn’t speak more volumes, Harrow missed and Repton holed. With the streams of players walking down the 18th after their matches ended, it quickly became apparent that the top game was the decisive one in the overall match.

This year it came down to putting and the team’s first game at Deal after two days at Sandwich definitely caught our first two pairs out. The greens at Deal were fantastic to putt on, smooth and quick, and certainly some of the best we have been on in a long while, but the pace was very different to that seen at Sandwich.

Overall, we will learn a lot from our week on the south coast, there was an amazing spirit and a wonderful atmosphere within the group and everyone performed well as a team.

The debutants played brilliantly, Finlay Matheson and Will Denehy finishing unbeaten with three wins out of three and Nick Compton with two wins from three.

On behalf of the team, I would like to thank all the supporters that made the journey down to this year’s Halford Hewitt. The financial support of the OHGS is greatly appreciated and particularly the efforts of Geoffrey Goddard, David Blackburn and Thomas Olesen must be praised, your help must be acknowledged.

We look forward to building upon this year’s achievement and look towards Harrow making it through to a ‘Hewitt Sunday’ very soon.

I genuinely cannot wait until April next year!

Some links to photos from this year, courtesy of Nick Compton below: