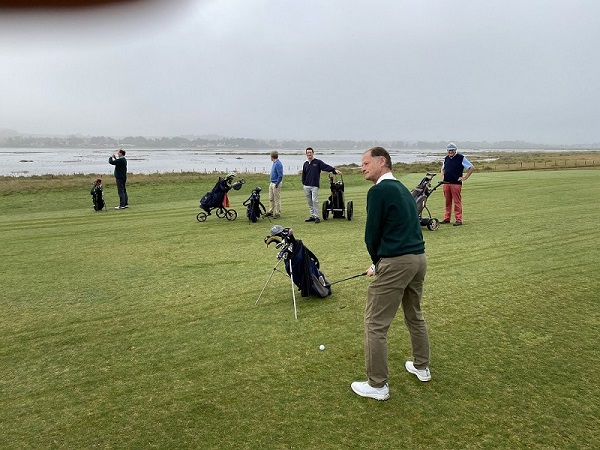 The Autumn Meeting took place for the first time since 2019.  It began with a fairly large number of participants which was eroded as the event approached and even after it had begun for various reasons. These included concerns about Covid, having the wrong dates, injury, more pressing engagements and better invitations such as a day’s shooting.  In the end, twenty players competed in on Thursday morning for the Aubrey Edwards Challenge Cup and the George Rothman Scratch Salver.

Ross Bryan won the Aubrey Edwards Challenge Cup with an impressive 42 Stableford points and looked like winning the George Rothman Scratch Salver with his 30 Stableford points off scratch.  However, the age allowance gave Graham Dunbar two extra points and his 29 Stableford points were enough for him to win.  We must mention David Moseley competing at the age of 85 coming in 4th in the scratch competition assisted by the cunning extra Stableford points awarded for age.  There were also two other octogenarians playing.

On Thursday afternoon the knockout competitions began and those not competing in the singles knockouts played foursomes for the Sunley Salvers.  This competition was won by Andrew Harding and David Moseley playing his second round of the day with an impressive 31 Stableford points.

With such a small field, the play was concluded on Friday morning with the knockout finals and the foursome’s competition for the Secretary’s Salvers.  In the low handicap section, Anthony Booth won the De Rougemont Challenge Cup, beating the holder from 2019, Graham Dunbar.  In the high handicap section, the Gilroy Challenge Cup was won by Ross Bryan who prevailed over James Amies who had a little trouble with his alarm that morning!  The Secretary’s Salvers were won by Rupert Fisher and William Sankey with an impressive 39 Stableford points.

There were very high tides and players needed to be at the clubhouse before dawn if they were to get breakfast and avoid walking the bank to the club.  We must give our thanks to the Royal West Norfolk Golf Club for putting on breakfast from 6:15 am and providing a very fine lunch on both days.

One player who also had some trouble with his alarm call had to make his way on foot but without knowing where the path to the bank began.  He followed the road as far as he could and tried to scramble up the bank without realising how deep the water beside the road could be and he arrived at the clubhouse soaked to the top of his legs!  The high tides provided spectacular scenery and privacy as nobody else made the effort to play golf that early and the tide was on the road for hours.

We had a very good supper in the local Sailing Club on Wednesday evening before the competition began and were unable to have our formal dinner at the clubhouse due to the tides.  Instead, we were looked after very well in the Amies barn in Docking with an excellent meal, a speech by our Captain, David Blackburn, and Harrow Songs.  The weather was amazing for the time of year and we were able to play in shirt sleeves most of the time.