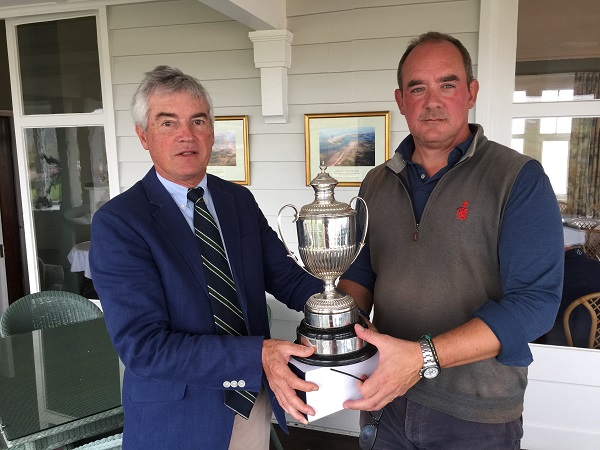 The meeting was very well attended and we were just able to squeeze everyone into the available accommodation.  We are very lucky to have such generous local supporters who make us welcome in their houses and others who allow us very low rates on hiring their second homes.

We had a very good supper in the Brancaster Staithe Sailing Club on Wednesday evening before the main event on Thursday morning.  The wind was very much in evidence the next morning and the average scores reflected that.  There were two clear winners and no need for count backs.  John Macpherson won the Aubrey Edward Challenge Cup for the best Stableford score off handicap and Jamie Warman retained the Rothman Scratch Salver for the best age adjust Stableford score off scratch.  So confident was he that did not bring the salver back for the prize giving!

Having started early we had an early lunch but could not start the afternoon rounds until we knew who had qualified for the knockouts.  The eight best low handicappers and the eight best high handicappers compete over three rounds for the respective trophies.  The rest of the field draw partners for foursomes competitions.  The afternoon foursomes for the Sunley Salvers were won by our Captain (David Blackburn) and President (Jamie Warman).

This year the tides were not so high as to prevent us getting to the clubhouse for dinner and we returned after several years’ absence.  It was Rob & Wendy Sackett’s last year as stewards at the club and they received a small presentation.  We were honoured by two guests this year, the captain of the Royal West Norfolk Golf Club (Anthony Goodrich) and the Hon Sec of the Halford Hewitt (Nick Owen). After dinner Jeffrey Bonas organised the Put-ons and songs which, in the absence of a piano, used a playlist and amplifier.

The dates for next year will be 1-2 October so put those in your diary now if you are interested in attending.