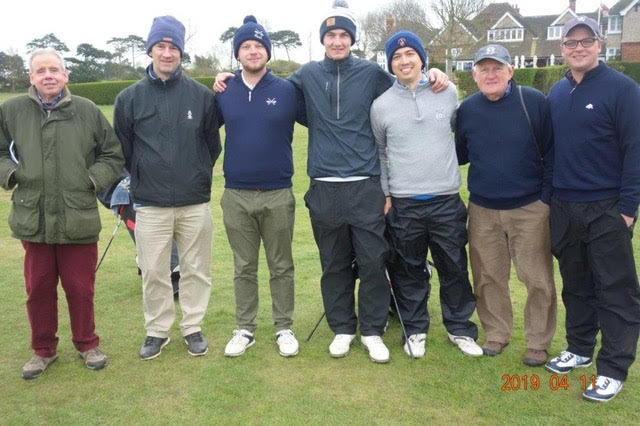 We had a wonderful buzz of fun and good spirits in the Hewitt team this year. The pairings were

Against Wrekin, we played very well and won all five games 3&2 or 4&3 if I remember correctly.

Unfortunately, we did not play so well against Bedford, who were a very good team, as most of them are these days, and Jan/Dan recorded a rare defeat at first pair. Our second and third pairs were both up in their matches at one point but ended up losing too, and the fourth and fifth games were therefore taken as halved matches.

It was splendid to have young Ed Bayne, who played fantastically, and Charlie Bick, recently returned to the amateur ranks from a couple of seasons as a pro. I am enthusiastically helped by Hamish Morrison who devotes enormous energy to helping me have games with the potential recruits, e.g. at Huntercombe with Henry and Ed B. a few weeks back, and he is very good at digging out players like Charlie Bick from unrecorded corners of OH activity.

Ed Bayne also very much enjoyed his first Hewitt and is keen to play for me again in the Grafton qualifying on 12 May.

I am really very grateful for the financial support that you have organised, as it makes it possible for me to get the students like Henry and Ed and other under ’30s, with burdensome travel costs, to trial matches at RSG and RCPGC to have games with their team-mates and master the challenges of links golf.

I will continue the hard work and am sure that Harrow will have its day in the Hewitt again before long.